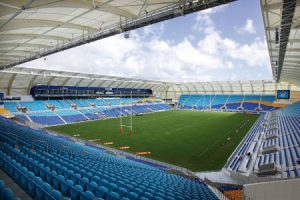 Opened to coincide with the start of the second season for the newly formed NRL team Gold Coast Titans, Skilled Park is the latest addition to the portfolio of Stadiums Queensland, and a testament to their vision of “Great venues. Good times”.

A true multi-purpose stadium, Skilled Park can boast to not only being the home of the Titans and the newly formed Gold Coast United Football Club, but also providing a total state-of-the-art facility that clearly reflects the $160 million invested in the project. As soon as it was completed it was instantly considered one of Australia’s premier regional rectangular stadiums providing event facilities, corporate suites, function rooms and corporate facilities.

The Project
The Skilled Park project was managed by Project Services, a building design and management consultancy group, and one of the five commercialised business units that comprise the Queensland State Government’s Department of Public Works.

Renowned for their innovative use of fresh and imaginative designs, Project Services employed the services of Sinclair Knight Merz (SKM), a leading engineering, sciences and project delivery firm to provide consultancy services for the system and infrastructure design.

“It was made clear to us that from Project Services’ perspective, performance, mortality and warranty were very important for such a high profile sporting arena. It was important to ensure that the technology used on such a monumental icon for Gold Coast sporting codes was of high quality and future proofed,” stated Jason Mackander, Senior Electrical/Lighting Designer, SKM.

SKM specified a system design which integrated a copper Category 6 horizontal solution with an OM3 fiber backbone providing the necessary headroom to support Gigabit Ethernet, whilst also providing a future proofing mechanism should the decision be made to upgrade to a 10 Gigabit horizontal solution in the future.

The installation was completed by Stowe Australia. An accredited Molex Certified Installer, Stowe chose to install a total end-to-end Molex solution, and upon completion warranted the site with Molex’s 25 year system warranty.

Jason Everest, Communications Foreman, Stowe Australia stated “Molex was chosen for this project for a variety of reasons. The flexibility of the product suite was seen as advantageous because being a sporting stadium; the structured cabling system needed to support high speed LAN/WAN communication as well as a variety of point of sales outlets.”

He continued “The Molex suite of products matched the requirement perfectly. Also Molex, in conjunction with our distribution partner Pacific Datacom, provided logistics and supply chain solutions which enabled us to meet our deadlines and their experience in successfully delivering large scale high profile projects was another key factor in our decision.”

The Installation
The high profile nature of the stadium, now seen as the Gold Coast’s premier sporting facility, provided a number of challenges during the installation.

The regional importance of the project meant that it was constantly under the media spotlight. As such, the site was subject to regular inspections by both the media and the Queensland Government. Commitments had also been made that the stadium would be completed in time for the Gold Coast Titans to commence the 2008 NRL season with Skilled Park as their home.

The strict time frame made it imperative that the installation was completed in an efficient manner to ensure the successful completion of the stadium. In order to achieve this Stowe Australia completed extensive work on designing the reticulation routes, working within the distribution length constraints, but ensuring the systems functionality remained despite the strict design criteria.

The structured cabling system consists of 900+ data points throughout the stadium supporting the numerous applications and protocols that were necessary to facilitate the operations of a premier sporting arena. In the case of Skilled Park, the cabling system needed to support; corporate box facilities, the ticketing system, administration offices, security systems, ATM machines and the numerous point of sale area’s around the stadium.

An OM3 Molex fiber backbone was installed to enable high speed communications between the individual stands of the stadium. The system design also called on the backbone cable to be run between the levels of each stand, providing communication between the floors and the ability to support the running of the two high performance video screens within the stadium.

Due to the open nature of the stadium design the decision was made to use a shuttered jack solution. The shuttered system provided the necessary protection against the recognised threat of dirt ingress, whilst ensuring that the system would consistently perform to Category 6 performance criteria. The protection that a shuttered system provides was deemed essential due to the number of mission critical systems being used throughout the stadium. As the home of the Gold Coast Titans and Gold Coast United Football Club the integrity of the infrastructure is tested to its limit every game. Come game day, the structured cabling system not only has to support point of sale transactions and electronics ticketing, but also supports the two large screen displays within the stadium, game timekeeping and the NRL’s video referee.

“Molex were only ever one phone call away when we needed them. In conjunction with their distributor Pacific Datacom they were regularly on site carrying out inspections, supporting the installation and us as the Molex Certified Installer,” stated Jason Everest.

He added “With their support we were able to help deliver the 750,000-strong public of the Gold Coast a state of the art sporting facility with a high quality system and a lengthy and comprehensive warranty. The choice to use Molex on this project was totally justified by the end result.”

Jason Mackander continued “All of the team members, designers, installers and Molex were always available to assist with the project. Being able to discuss design, installation or co-ordination issues this easily is the reason that the project run so smoothly.”

He concluded “With this open communication and understanding we were able to produce a product that not only met the client’s needs but allowed for future expansion with a simple comprehensive design.”