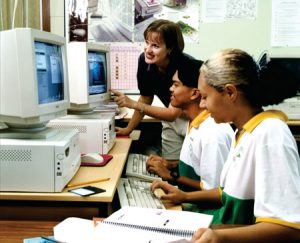 In 1998 DETA, then known as Education Queensland, acting on behalf of the State Government, embarked on an ambitious multi-million dollar networking project that was the largest of its type ever undertaken in the Southern Hemisphere. Ongoing to the present day, the School LAN Project provides the necessary network infrastructure at each of DETA’s 1400 schools and offices through­out the State. As well as allowing DETA to align all its schools’ internal management processes with its own long-term strategic plan, the installations enable approximately 60,000 staff and 500,000 students to benefit from the development and delivery of the modern curriculum.

As part of the project, each of the prep, primary and secondary facilities across the State has had network starter kits installed to enable access to the Departmental Intranet and Internet via the established DETA Wide Area Network (WAN). DETA’s WAN covers approximately three million square kilometres and has a LAN installed in all 1400 sites across Queensland.

Queensland’s State Government, as part of their election pledge, promised to make Queensland the “Smart State” and to ensure core IT skills, which business demands, were taught as part of the education system. The Connect-ED project brief was developed in 1997 to support the “Smart State” strategy through the provision of a comprehensive telecommunication and information infra­structure in Queensland that underpins the school’s participation in the information age.

Connect-ED aimed to the improve delivery of education services for all Queensland’s schools through provision of high-speed digital connections, a Managed Internet Service (MIS), connectiv­ity to the Department’s intranet and the capability for the rural and regional population to connect to the Internet.

“The Queensland Government views the education of Queensland’s young people as critical to the State’s economic and social success and the realisation of the Smart State vision,” explained Jeff Cowan. “The installation of the cabling and switching infrastructure, coupled with the addition of computers and improved teacher training, increases the skills, knowledge and competencies of individual staff, students and in turn communities. Queensland’s education system can help secure the wide range of skills necessary to make Queensland an attractive location for potential new busi­nesses and support existing industries.”

The School LAN project played a pinnacle role in achieving the State Government’s Smart State, Connect-ED strategy and in the current Smart Classrooms strategy. The need for a network infra­structure which is accessible, geographically widespread, cost efficient and secure was paramount. The enormity and complexity of this task has meant that a number of unusual conditions have been encountered throughout the project.

The State of Queensland spans a geographical area of 1,727,000 sq kilometres and has a popu­lation of over four million — with the majority located in the southeast corner and on the eastern seaboard. The project included every school situated throughout Queensland including all its diverse terrains from the arid west to the northern tropics and from the vast mainland to tiny remote islands. Schools were located anywhere from 1 to 2500 kilometres from the project office.

“As a government funded project we had very defined and inflexible timelines, but perhaps the most challenging aspect of this project was the number of stakeholders involved and the effective man­agement of their requirements,” comments Mr. Cowan. “Apart from dealing with DETA, suppliers were also required to deal with each of the State educational facilities that had part ownership of their LAN infrastructure. It is testament to the professionalism of all involved that the project has been so successful.”

“The budget we had in mind for the cabling infrastructure meant that there was always going to be strong competition,” explains Mr. Cowan. “Molex won our business because of the cost effec­tive solution put forward and the value for money this offered. Molex had an existing installer base covering 75% of the population and 50% of the land area of the State. Molex’s reputation gave DETA trust and confidence in its ability.”

John Wakeham of Communications Design & Management Pty Ltd (CDM), the successful ten­derer for the Project Management phase of the project, explains: “During the installations, project personnel require planning and flexibility as we are required to work around each of the individual school’s requirements. School fetes, sports days etc, often mean that project personnel are not allowed on site. In addition, there is an obvious need to minimise any disruption to the delivery of classroom education. Planning is made often made more difficult by the requirement to schedule installations around tropical monsoons, cyclones and the geographical disparity of the educational facilities.”

With an installation program of this size and complexity there are inevitable problems which the project team needs to overcome. Paul Hutton, Queensland Area Manager, Pacific Datacom, the supplier of Molex products to DETA, recalls: “As well as the basic issues of bringing together scores of different businesses and hundreds of people to work together on various projects, manag­ing the installation, on time and to budget, involves overcoming some extraordinary and unpredicta­ble events. I recall one such event when a remote island was quarantined as a result of an outbreak of highly contagious Dengue Fever and Encephalitis, thereby preventing the installation team ac­cessing the site. Major flooding was another problem, when the northern tropics was inundated by some of the heaviest rainfall on record. Access by road, rail and air was cut. On another occasion, access by air to one of the islands was prevented when the airline involved had their licence revoked pending a safety review after a plane crash in the region. A major factor in ultimately delivering the project’s successfully was the contribution from Molex and their network of installers who did an extremely professional job.”

“Molex’s 25-year product, installation and systems warranty was also a key factor that influenced our decision. It is reassuring to know that Molex provide such strong support should anything go wrong. They also have the capability in-house to answer questions on technical issues if we require further help,” Mr. Cowan added.

“Molex has played an important role in the management of the project quality. Throughout the project, Molex has undertaken infrastructure certification and site inspections to ensure the uni­formity and high quality of workmanship and installations,” Mr. Cowan explains.

The development of the EQSITEC/Molex certification training course was undertaken collabora­tively between a senior management group from DETA and Molex. EQSITEC is a quality docu­ment developed by DETA prior to commencing the project in 1997 which still today defines quality standards for all DETA projects.

“Molex has been involved in running certification training courses for all relevant installers in­volved in the project. It is estimated this number is in excess of 400 individual personnel,” com­ments Mr. Cowan.

During our many projects, Molex plays a prominent role as technical advisor. Molex works closely with DETA during the initial stages and works closely with its network of installers during project to ensure projects run smoothly. The technical knowledge and support from Molex’s RCDD quali­fied personnel ensures that DETA’s new network has a life span of more than ten years, meaning schools are ready to exploit new emerging technologies and growth. Tony Noble, Molex’s Managing Director – Asia PacRim, commented: “We aim to provide our customers with the best and most affordable solution. This is one of the largest and most challenging projects we have been involved in over such a duration. We are very proud of our role in the project and are confident that the children of Queensland will continue to benefit from the technology our infrastructure enables.”

“It is a simple fact that without the investment in our structured cabling infrastructure, DETA would not have been able to deliver the modern curriculum to more than 450,000 Queensland stu­dents and equip them with the skills required to enter the workforce. The role played by every single person in the project has been vital in its success and in addition, the minimal disruption caused at our facilities is great credit to all involved. The new network has had a positive influence and has put us in good shape for the future,” concludes Mr. Cowan.