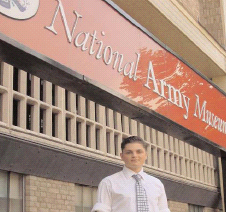 The National Army Museum in London is updating its IT System to provide the general public with instant access to its complete range of stock. A fundamental phase of the upgrade has been the installation of a Molex Premise Networks Category 5e structured cabling system, which has helped increase the efficiency of some museum processes by up to 40%. The system was recommended and installed by Sterry Communications, a Molex Premise Networks Certified Installer.

The National Army Museum contains artefacts charting our nation’s military history from Tudor times to the present day. Located in a Grade II listed building in the heart of Chelsea; it attracts over 180,000 visitors a year.

The museum has now embarked on a major project to upgrade its information systems to bring it into the 21st Century. Phil Sharp, Systems Manager has a futuristic vision of a museum operated completely without paper.

He explains: Ultimately we want to introduce an on-line session’s register which catalogues every item in the museum. It will provide great scope for the general public as they currently only get to see about 5% of the museums content. When all the changes are implemented, people will not only be able to have access to every item available from terminals in the museum or remotely via the Internet, but they will also be able to view the entire history associated with it at the touch of a button.

In addition to its 180,000 visitors, last year the museum scored an average of 18,000 visits to its web site each month. Phil Sharp expects this to increase when all of his changes have been implemented. The long-term aim is to have a nation-wide database where museums at Catterick, Sandhurst and Canterbury will also be networked. The first requirement for the National Army Museum to implement these changes was to find a system which would support interactive communication between 95 museum staff, curators and the general public. It also needed to be able to cope with future expansion over the next five to ten years.

Phil Sharp explains: I wanted every member of staff to have access to the Internet, email and museum database from their desktop. We did consider wireless as an alternative, but this wasn’t a viable option as it wouldn’t have been suitable for secure areas and it wouldn’t have been operational in the basement where the walls are very thick.

He continues: Wireless communications would have been too slow also. To implement the system changes we needed to improve the bandwidth to more than 100MHz. The Molex Premise Networks PowerCat Category 5e system is more than adequate as it provides transmission performance that exceeds the proposed Category 5e link criteria.

The network is being used for data and voice transmission. Sterry Communications, who also installed a new telephone system, worked closely with staff at the Museum to overcome the difficulties associated with modernising a listed building which is open to the general public.

Jeremy Ford, Operations Manager at Sterry Communications, explains: As it is an old building we decided that Category 5e was the best solution for installation purposes and to meet the bandwidth requirements. Category 6 wasn’t suitable as the bend radius on the cable would have been too tight in some places to meet the requirements of the standard.

He continues: The installation was quite tricky as surface mounting wasn’t possible. We had to do a lot of diamond drilling to enable the cable to be laid between floors which entailed working closely with the staff at the museum to ensure we had access to secure areas and that minimal disruption was caused for the staff and general public.

The four-storey building has been cabled with 200 points, which has made a big difference to staff. Since the installation, Phil Sharp has been able to implement the first phase of his changes. He explains: All members of staff now have access to email, the Internet and database. Curators are already starting to input items into the database themselves. By cutting out the need for staff to
complete lots of different forms, the processing system is about 40% faster.

Phil Sharp said: I have been pleased with Sterry’s ability to work around public hours. Despite it being a tricky installation, it went very smoothly. Sterry recommended the Molex system to meet our requirements. It is very reassuring to know that Molex has provided us with a 25 year product warranty.

Kevin Denton, Channel Manager, from Molex Premise Networks said: We are pleased that our PowerCat Category 5e system has been so effective in supporting the implementation of the National Army Museums plans. The Molex 25 year warranty will also ensure that we continue to support them with future developments.