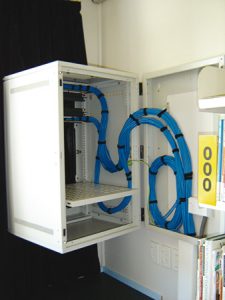 Molex Incorporated, global manufacturer of structured cabling systems, has been specified to complete the network infrastructure upgrade of hundreds of small schools throughout New Zealand, on behalf of the Ministry of Education’s (MoE) ICT Unit. The pilot project involving 23 schools in the Tamaki and Paeroa clusters has already been successfully completed, with the first phase consisting of 300+ schools commencing in November 2005.

In 2004, New Zealand’s MoE conducted a School Network Survey across the country, the findings of which resulted in the issuing of new MoE standards for computer networking in schools. The initiative was developed primarily to reduce the wide variation between schools and bring school networks up to the Ministry of Education network standards, so that all schools can benefit from information and communication technologies. The survey revealed that small schools were in fact more likely to have no network infrastructures in place, due to the disproportionate costs they faced in building computer networks.

It was therefore realised that the disparity in technologies between certain schools in New Zealand was to the detriment of many students within the country, a problem the Minster of Education was determined to resolve: “Our vision for New Zealand is that all schools can benefit from information and communication technologies wherever they are located” said Trevor Mallard (MoE). “This initiative will help teachers and students in small schools access to a wider range of resources, such as digital learning and other rich multi-media materials that help students to learn.”

The primary aim of the project is therefore to bring the selected schools’ computer networks into the 21st century, hence, NZ$11 million of government funding has been granted to help build new computer networks and upgrade existing infrastructures within the schools. Molex’s involvement was principally to supply the Structured Cabling System (SCS), which accounted for 80% of the total costs, budgeted for the project. The upgrade will be carried out in two phases and is looking to span over a total period of 20 months.

Not only did the company’s 25 years of specialist expertise help them achieve this, but the development of their web based on line project and asset management system was also an influential factor in their tender win.

Tony Noble, General Manager — Molex Incoporporated, Premise Networks Division, commented “It was found during the schools trials that this project management package introduced significant efficiencies resulting in major cost savings, and produced data that could be mined down to precisely forecast budget prices for other schools to within 2% accuracy”. He also added that: “This product is now used by our distributor to win other business thereby providing a pull through for Molex connectivity products.”

The Ministry had gone through extensive evaluation process for product selection and Molex met all the criteria outlined in the Ministry’s standards. Molex structured cabling solutions were therefore proposed by the prime contractor (CSL) to be implemented throughout all of the 300 small schools outlined in the project. Tony Noble states “We are delighted that Molex was specified as the supplier for this project – during the pilot programme our products proved to be the best value for money with consistently good performance in the New Zealand education sector for over 20 years”.

Another rationale as to why Molex products were the preferred choice over that of their competitors’ lies in the firm relationship the organisation has created with Connector Systems Ltd over the past two decades. Mak Kalkarni, General Manager of CSL’s Networks

Division highlights “The Ministry holds Molex in very high regard because of their strong commitment to carry out 100% site inspections at all certified installations in New Zealand and the desire to maintain a very high quality of Molex Certified Installer base”.

Furthermore, the Policy and Guidelines for Schools, release by the MoE, state that warranty provisions should include a minimum defects liability period of 20 years, therefore favouring Molex’s comprehensive 25 Year Product and Systems Warranty. This also covers site inspections and equipment testing – another of the Ministry’s minimum requirements, based on the recognized Australian/New Zealand 3080 Cabling Standards.

Prior to any installation work commencing, CSL conducted a detailed audit of the schools to produce a design and upgrade proposal. This was not a straightforward task, as the upgrades needed to take into account the functional and operational requirements of each school, due to the varying conditions of the existing networks, if there were any in place at all.

The MoE have specified Gigabit Ethernet over the backbone and 100Mbps to the desktop. Molex Category 6 UTP cabling will be installed in the horizontal and a combination of OS1 and OM3 fibre cables in the vertical. In instances where there are two or more campus buildings, OM3 fibre cables will also be used to link the buildings together, given its enhanced protective properties. For the pilot project alone, over 2500 termination points were installed — with a staggering 18,000 Cat6 outlets and an estimated 672 miles of cabling will be used throughout the project.

Although the implementation of faster and more efficient networks plays a vital role in this project, the current and future cost impacts on the schools taking part and the reliability of the equipment are key to its overall success.

Prior to the MoE issuing the new standards document, many schools had approached cabling in an ad-hoc fashion often choosing the cabling supplier that submitted the lowest quotation. They later discovered that the cabling, or the installation had been poorly implemented, presenting problems in terms of reliability and maintenance – resulting ironically in costs escalating higher than the most expensive quotation they had originally received.

Phil Earl, Torque IP (a specialist division of CSL) explains: “Many schools have spent thousands on cabling and at the end achieved a result that has left them wondering why they started. The new standards however create a benchmark for reliability and usability to

ensure that money is spent once and wisely, add to this minimizing the risk using companies that offer 25 year systems warranties and it is a far better prospect for the future development of digital opportunities.”